The R101-Compact Carbine is a carbine utilised by both IMC and Militia Infantry on the Frontier. The R101 is manufactured by Lastimosa Armory, and was introduced as a replacement for the G2A4 Battle Rifle for IMC Marines. It has since been superceded by the R201 Special Operations Assault Rifle.

"They'll call us terrorists or worse, but we can't win playing by their rules." - MacAllan

It has a magazine size of 24, and is compatible with a variety of attachments including;

The R101C appears to have been widely been replaced by the R201 Assault Rifle by the time of Titanfall 2. However, concept art shows the R101 in many different configurations with collapsing stocks, shorter barrels and other changeable parts. This is because early Titanfall had the R101 as a completely customisable weapon that the player would be able to modify to be a DMR or an SMG - these would later become separate weapons, the Longbow and R97, respectively. The heritage of the carbine can be clearly seen in these weapons all having very similar recievers and designs. 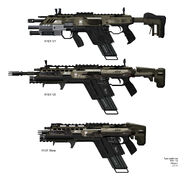 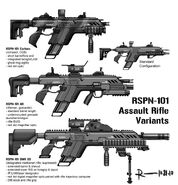 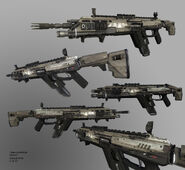 The R101 as it appears in Titanfall 2

Community content is available under CC-BY-SA unless otherwise noted.
Advertisement